As it has been a small while let’s get everyone up to speed on what I have been working on. Well with heraldry changes took place from the kingdom to add awards and with that, all those that receive orders of high merit will be conveyed a Grant of Arms along with that. So let’s take a look at Malagentia’s OP.
So as I go down everyone’s Orders of High Merit, I have to pay attention to the dates of when they received them. For that is when their GoA would be established on their first Order of High Merit. Might think easy however this can and did change the line up on the OP for someone who receives for an example an Order of Golden Rapier in 1992 vs someone who has an Order of the Silver Crescent in 93 a Court Baron and Grant of Arms in 1993 also. Their Grant is reflected on when that person received the Order of the Silver Crescent and in case of the individual that received the Order of the Golden Rapier in 92 also received a Grant of Arms in 1992 and places that person higher on the OP then the person with the Court Baron and Grant of Arms beforehand. So I spent majority of the time going over each one of the Province’s list, add the appropriate awards, change up the order. Then take breath for the update that had taken in.

Then I move on to other heraldry that I have been ongoing on for a bit.
First up was Elisif Hoarr Kona.
This proved interesting for me for in the Norse culture it is possible for a wife to be named with her husband’s name with the Norse word of “kona” for wife included in this. I have never seen this before however I did search in the Oscar and shown where It has been done before, so I added the reference material to her name and called it good.
Her device proved to be a challenge to say the least. She has a particular story in mind with her arms and reflected that proved to be a challenge. Let’s take for starters the raven displayed. This is a step from period practice where a non-eagle being shown displayed, in itself no issue, however putting together all aspects that she was looking for ran into a challenge. First she wished to have “Argent a raven displayed, maintaining a thistle, vert”. When I looked at hit I thought it was well done, simple, and should be no issue. Then I ran it for conflict. At least a couple of conflicts one of which was the King of Sicily. Opps yea let’s not go there ok, next run. How about if I bracket three thistles around the raven how would that look. “Argent, a raven displayed sable between three thistles vert”. I liked how this took shape ran it through conflict and this time I conflicted with Prussia. Why? As theirs is “Argent, an eagle displayed sable crowned Or.” Well because of the raven being displayed with it being a SFPP also runs into conflict with displayed eagles. As im reading down the comments from my colleges one made a recommendation that seemed to take well, split the background in half and make it part gold, added the sufficient changes to avoid conflict. Add to it the client loves it so we have “Per pale, argent and Or a raven displayed sable between three thistles vert.”

A friend introduced me to a friend of hers that was looking to get his name and device registered. His name was running into a real life sluggish so I suggest as he was going to be at Pennsic already to speak to herald’s point for at the time frame they would get it completed and in process then waiting on me. Later on he talked to me about the device that he was looking into. He wanted an Irish wolfhound, a sun with two stars in the chief area. He showed me a concept of what he was looking for and then I redid it the shield. At the time frame he was looking into a mullet of eight points on either side of a sun. This ran into a rule of conflict with suns and stars. Do to the number of points. This is in kind of having a dagger next to a sword. Same style just a “mini me”. After talking over with the client we decided to go with a seven pointed mullet. Giving us a wonderful “Per fess sable and argent, a sun Or and an Irish wolfhound courant sable and in chief two mullets of seven points argent” for Fearghus Mac Cailin. 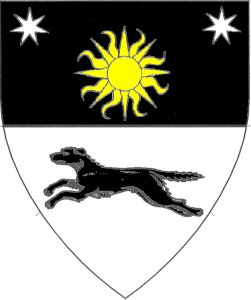 Johannes von Braunschweig, Ahhh my friend your name was a joy to work on for I learned a bit more about locative and how it relates to nationality. In your case German. Your name was a combination of researching within Heraldry.sca.org under German and Familysearch.org. once the name elements were in place then at that time used the joiner of “von” indicated that he was from Braunschweig or the German Brunswick.
His device he had been using for a while without registering and went to see if he can register it. I looked at it “Gules, a demi-sun Or.” And checked to see if there was any conflict or rules issues that would cause any difficulties. Sadly, there were not one but many conflicts with his demi-sun. so to clear the conflict one of my colleges suggested to add another demi sun under the original and the checks seam to clear all conflicts. I had to giggle with this and dubbed it the setting suns of Tattoine and here we have “Gules, in pale two demi-suns Or.”

Úlfeiðr Artadóttir came to me looking for a name and device she wanted to use. At first I was looking over her name and there ran into some issues from what she originally wanted. So we made a change to “wolf daughter of duck” after a laugh from both of us we ran up the forms. Her device came together nice with feedback of what she was looking for, it had to be sable with argent, including ravens and a wolf. Mmmm hugin and mugin much. Ok so made the wolf laying down and the ravens to either side to get “Sable, two ravens respectant and in base a wolf couchant argent”

Finally, for today as always one of the greatest joys in my job is to recognize up in coming heralds with my favor. This time there is a guy in the girl club lol. He has been working as the Herald for the Shire of Giggleswick and I have watched his progress all year. Even working with clients outside of his kingdom.  Cúán hua hÓcain Keep up the good work.

This site uses Akismet to reduce spam. Learn how your comment data is processed.