Since my last tale more information has gotten to me.  Thank you for shedding more light on things.  So for heraldry it’s more broken down like this;

Silent Heraldry [recently reintroduced and starting to get some traction]

Ceremony [we don’t do this much outside of Coronation, but it’s a category some people work in]”

(credit for Master Rowen Cloteworthy for breaking this down for me)

What I was referencing from my own point of view, as a Provincial herald, as well I am sure a shire, canton, or even a riding herald. You could be the catch all for all above.  If you are able to get deputies, this does free things up, and as well makes things a lot easier for the Pursuivants, all together.  Now do not get me wrong, I love being a herald. The joy that I do find in being one is something that I equal to being an archery marshal, or even more so when I was a heavy list fighter.  The added benefit is that for at least in my neck of the woods, many of the duties listed above, are not something that many would seek in being a herald.  Especially the book work, I have heard that more than once that “it is so dull”.  Thank you challenge accepted and I would say done to a degree that is on par as I can do at this stage, for there is a lot more learning to go.

The next part of this is without a doubt the biggest joy that could ever come to me.  Back some time ago when I took the post of Blue Talbot Herald, the discussion was to recognize those heralds that have come above and beyond the call and should been seen within the herald community for the work they have done ( I refer you to the “the tale of the blue paw favors”)

This past Birka I had the distinguish to even in front of the Senior Staff of the East Kingdom College of Heralds (man got to love how that worked out).  To recognize two more: 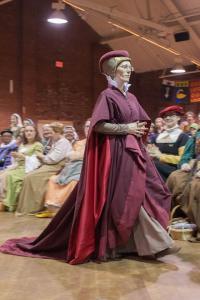 You have pounced when I needed a hand for the last couple of Great Northeastern War.  I have watched your progress from beginning herald to what you are now.  It was an honor to present my favor to you.

Oh where do I begin.  You have been my right hand for the last 2 great northeastern wars, especially last year when in a since I was pulling double duty at the same time.  I have seen you as a Baronial Herald and learned as much as I can from you as like I said at Birka, “pulled my head out of the fire not once but twice”

On the side note I giggled to see these two at court at Birka Lijsbet receiving her AOA, and Cassandra becoming part of the Order of the Silver Crescent.  Great job to the pair of you, you make being your Regional Herald a joy.